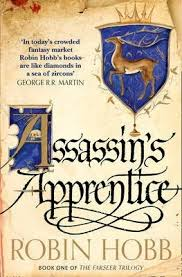 Synopsis
In a faraway land where members of the royal family are named for the virtues they embody, one young boy will become a walking enigma.

Born on the wrong side of the sheets, Fitz, son of Chivalry Farseer, is a royal bastard, cast out into the world, friendless and lonely. Only his magical link with animals – the old art known as the Wit – gives him solace and companionship. But the Wit, if used too often, is a perilous magic, and one abhorred by the nobility.

So when Fitz is finally adopted into the royal household, he must give up his old ways and embrace a new life of weaponry, scribing, courtly manners; and how to kill a man secretly, as he trains to become a royal assassin.

What I thought
I read this book along with the Name of the Book book club.  I enjoy watching their booktube channels and was super excited to see them start this.

Assassin’s Apprentice is an adult fantasy novel. This is the first book in the Farseer trilogy by Robin Hobb, it is a slow-paced political fantasy and spends time laying out a lot of groundwork for the rest of the series.  This is the story of Fitz, the narrator’s life everything you get is all one-sided so as of this first book there is only one POV.

You are following Fitz’s life from the age of 5 to 14.  This poor kid just gets railroaded time and time again.  One thing that I really did not like is that it seems that all of his turmoil comes from all of the adult characters in this book  This book is also a product of its time when using female characters. So as long as you can accept that you will be fine.

Even though you are getting this narrative from Fitz I did not like him very much. In my opinion, he accepted his lot too easily. My favorite character in this book is the Fool.  I really liked the mystery surrounding them. I use them because you do not know the age or gender of the Fool I feel that they may have a bigger role later in books. I can’t wait to order the next book.  I just need to order it from the book depository. I am not a fan of the US mass market books so I order the British paperbacks and the shipping is free. I’m not an affiliate I just like getting books from there.

Has anyone else read this and if so what did you think?

One thought on “Review: Assassin’s Apprentice by Robin Hobb”