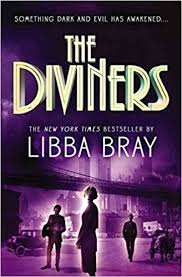 The Diviners by Libba Bray
Add to Goodreads

Synopsis
Evangeline O’Neill has been exiled from her boring old hometown and shipped off to the bustling streets of New York City–and she is ecstatic. It’s 1926, and New York is filled with speakeasies, Ziegfeld girls, and rakish pickpockets. The only catch is that she has to live with her uncle Will and his unhealthy obsession with the occult. Evie worries he’ll discover her darkest secret: a supernatural power that has only brought her trouble so far.

When the police find a murdered girl branded with a cryptic symbol and Will is called to the scene, Evie realizes her gift could help catch a serial killer. As Evie jumps headlong into a dance with a murderer, other stories unfurl in the city that never sleeps. And unknown to all, something dark and evil has awakened…

What I thought
The Diviners is the first book in a young adult paranormal historical fiction series. This story is set in New York City during the 1920s. Evie (one of the main players) gets into trouble at home in Ohio, for performing parlor tricks. Her mother’s solution is to send her away to her brother in New York. Evie is then sent to stay with her Uncle Will (Unc) in New York City for a few months while everything blows over at home. Will owns the Museum of American Folklore, Superstition, and the Occult, which leads them to be asked to be consultants on a case.

When a Serial Killer terrorizes the city with ritualistic killings Detective Malloy reached out to Will for help. Will and Evie dive into this case to discover who the killer is.  Will soon learn that Evie was not just merely doing parlor tricks that got her in trouble in Ohio. She is a Diviner.

I loved this book it was so atmospheric. I found it so hard to put down. I couldn’t help to find myself liking Evie no matter how flawed she was. this book sets up the series so well. You have multiple storylines that all intertwine so well. All of the characters are so well balanced. The story is just woven so well it kept me interested the whole way through.  This is another book I have owned for a while and I have no idea why I was waiting to read it. If this book is just sitting on your shelf unread do yourself a favor and pick it up.  You will not regret it.

4 thoughts on “Review: The Diviners by Libba Bray”