In this New York Times bestselling sequel to Kerri Maniscalco’s haunting #1 debut Stalking Jack the Ripper, bizarre murders are discovered in the castle of Prince Vlad the Impaler, otherwise known as Dracula. Could it be a copycat killer…or has the depraved prince been brought back to life?

Following the grief and horror of her discovery of Jack the Ripper’s true identity, Audrey Rose Wadsworth has no choice but to flee London and its memories. Together with the arrogant yet charming Thomas Cresswell, she journeys to the dark heart of Romania, home to one of Europe’s best schools of forensic medicine…and to another notorious killer, Vlad the Impaler, whose thirst for blood became legend.

But her life’s dream is soon tainted by blood-soaked discoveries in the halls of the school’s forbidding castle, and Audrey Rose is compelled to investigate the strangely familiar murders. What she finds brings all her terrifying fears to life once again.

Kingdom of Ash and Soot by C.S. Johnson
5 Stars
Add to Goodreads

“I want to be free.” The words came rushing out of me before I could think through their implications and consequences.

“There are two things you need to know about yourself if you want to be free—what you stand for, and what you stand against.” Lady Penelope held up her hands, brandishing a pair of daggers that had been hidden in her skirts. “This world lives enslaved to its destruction, and so long as you are living, as long as you are fighting, you will be free.”

I gazed at the daggers, transfixed. Each blade was clothed in a leather scabbard, but the silver and obsidian of the daggers’ hilts winked at me, as though it was calling for me.

For the last ten years, nineteen-year-old Eleanora Svobodová has worked as a servant in her stepmother’s household. Along with her older brother, she dreams of the day they will be free to live life on their own terms.

But everything changes when their estranged grandmother comes to Prague on behalf of Queen Victoria. Throughout Bohemia, a string of murders and secret whispers hint at a larger coup. As the leader of the Order of the Crystal Daggers, an ancient order of spies and soldiers that protect kingdoms and their rulers, Lady Penelope is determined to mete out the perpetrators. Now, Eleanora must make the choice between a life of intrigue and saving the lives of others.

Can Eleanora find a way to do the right thing and still find freedom?

With a fun blend of historical fiction, true love, castle intrigue, and family dysfunction, The Order of the Crystal Daggers is the latest adventure series from C. S. Johnson.

In the kingdom of Goredd, dragons and humans live and work side by side – while below the surface, tensions and hostility simmer.

The newest member of the royal court, a uniquely gifted musician named Seraphina, holds a deep secret of her own. One that she guards with all of her being.

When a member of the royal family is brutally murdered, Seraphina is drawn into the investigation alongside the dangerously perceptive—and dashing—Prince Lucien. But as the two uncover a sinister plot to destroy the wavering peace of the kingdom, Seraphina’s struggle to protect her secret becomes increasingly difficult… while its discovery could mean her very life. 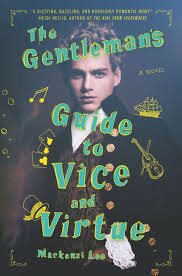 Henry “Monty” Montague was born and bred to be a gentleman, but he was never one to be tamed. The finest boarding schools in England and the constant disapproval of his father haven’t been able to curb any of his roguish passions—not for gambling halls, late nights spent with a bottle of spirits, or waking up in the arms of women or men.

But as Monty embarks on his Grand Tour of Europe, his quest for a life filled with pleasure and vice is in danger of coming to an end. Not only does his father expect him to take over the family’s estate upon his return, but Monty is also nursing an impossible crush on his best friend and traveling companion, Percy.

Still it isn’t in Monty’s nature to give up. Even with his younger sister, Felicity, in tow, he vows to make this yearlong escapade one last hedonistic hurrah and flirt with Percy from Paris to Rome. But when one of Monty’s reckless decisions turns their trip abroad into a harrowing manhunt that spans across Europe, it calls into question everything he knows, including his relationship with the boy he adores.

The City of Brass by S.A. Chakraborty
(2 Week buddy read)
Add to Goodreads

Nahri has never believed in magic. Certainly, she has power; on the streets of 18th century Cairo, she’s a con woman of unsurpassed talent. But she knows better than anyone that the trade she uses to get by—palm readings, zars, healings—are all tricks, sleights of hand, learned skills; a means to the delightful end of swindling Ottoman nobles.

But when Nahri accidentally summons an equally sly, darkly mysterious djinn warrior to her side during one of her cons, she’s forced to accept that the magical world she thought only existed in childhood stories is real. For the warrior tells her a new tale: across hot, windswept sands teeming with creatures of fire, and rivers where the mythical marid sleep; past ruins of once-magnificent human metropolises, and mountains where the circling hawks are not what they seem, lies Daevabad, the legendary city of brass, a city to which Nahri is irrevocably bound.

In that city, behind gilded brass walls laced with enchantments, behind the six gates of the six djinn tribes, old resentments are simmering. And when Nahri decides to enter this world, she learns that true power is fierce and brutal. That magic cannot shield her from the dangerous web of court politics. That even the cleverest of schemes can have deadly consequences.

After all, there is a reason they say be careful what you wish for…