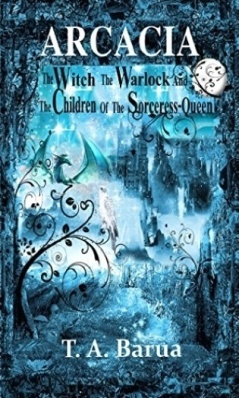 Arcacia: The Witch, The Warlock and the Children of the Sorceress Queen
by T. A. Barua
Add to Goodreads

When a beautiful sorceress-queen, Selina, spurns Setanor, a powerful, jealous northern warlock, an invasion of Western Arcacia begins.  To save her newborn triplets from death, they are cast down a magical river to the New World, a place called, ‘London, England.’

Thirteen years later in a cold, Victorian London attic…  The future of Sophie, an impoverished orphan looks bleak but everything changes, to her astonishment after a young witch arrives through her bedroom window with an incredible message and a warning. So begins her life in a beautiful, enchanted ancient world…

How do Sophie and her four friends summon the tremendous courage to rescue her long-lost family while restoring Arcacia from dark, ruling forces? Mystical beasts, scepters, powerful witches, and daemon-trolls are just some of their challenges. Meanwhile, the dreaded terrifying warlock, Setanor, and his witch-consort Lilith have sent a secret enemy to plan their downfall…

The prologue to, ‘Arcacia,’ outlines the events leading up to the Great thirteen year war in Arcacia, a magical realm of the Old World.  To avert the threat of invasion from the northern territories, Selina’s  father, a King of the Argenon family clan had promised his beautiful daughter, Selina’s hand in marriage to Setanor, a powerful warlock from the north.  The aggressive sorcerer ruling family houses of the North had always openly threatened to invade rich, flourishing lands of western Arcacia. So far the Argenons and their people had managed to keep them at bay but this was getting harder.

Selina, a strong, beautiful well-educated Arcacian lady is adamant she’d rather stand up to Setanor than subject the people she loves to a life-time of tyranny. After her father suddenly passes away Selina breaks his oath; gives up her magic powers, and chooses to marry an Arcacian commander.  Harris originated from a strange world called England in the New World, he is unlike other Arcacians; Harris is human.  Selina forfeits her magical powers by marrying an outsider, as is dictated by law. They have three beautiful babies, triplets a boy and two girls. But Setanor who wanted to inherit Western Arcacia and who genuinely fell in love with Selina from afar, is furious, perceiving her derisory actions to be an act of scorn and disrespect.

He declares war on Arcacia, and one fateful night he appears with his guards to Selina’s home, captures Selina, and banishes Harris to the underworld.  Before being imprisoned and spellbound in a tower, ‘Until she comes to her senses and agrees to accept Setanor,’ Selina pleads with Set’s commander, Garwain, also her paternal uncle to spare her babies.  He complies,  placing them in an enclosed basket which he casts down a magical river that forks to the New world to,’ London, England,’  the land of their father, not knowing if they will live or die.

The children survive but are separated. A mysterious woman who finds the babies floating along the river, takes one of them, a girl, to raise herself.  A wolf suckles the boy who is discovered in the forest then raised by an elf-Queen and her people. Meanwhile the third child a girl, Sophie drifts on to England. 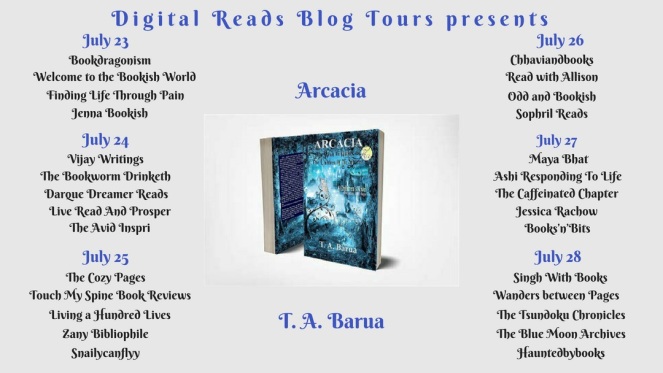 One thought on “Blog Tour: Arcacia: The Witch, The Warlock and the Children of the sorceress Queen by T. A. Barua  ”