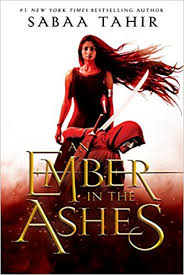 An Ember in the Ashes by Sabaa Tahir
3.5 Stars
Add to Goodreads

Laia is a slave. Elias is a soldier. Neither is free.

Under the Martial Empire, defiance is met with death. Those who do not vow their blood and bodies to the Emperor risk the execution of their loved ones and the destruction of all they hold dear.

It is in this brutal world, inspired by ancient Rome, that Laia lives with her grandparents and older brother. The family ekes out an existence in the Empire’s impoverished backstreets. They do not challenge the Empire. They’ve seen what happens to those who do.

But when Laia’s brother is arrested for treason, Laia is forced to make a decision. In exchange for help from rebels who promise to rescue her brother, she will risk her life to spy for them from within the Empire’s greatest military academy.

There, Laia meets Elias, the school’s finest soldier—and secretly, its most unwilling. Elias wants only to be free of the tyranny he’s being trained to enforce. He and Laia will soon realize that their destinies are intertwined and that their choices will change the fate of the Empire itself.

Very Good Lives: The Fringe Benefits of Failure and the Importance of Imagination by J.K. Rowling
4 Stars
Add to Goodreads

In 2008, J.K. Rowling delivered a deeply affecting commencement speech at Harvard University. Now published for the first time in book form, VERY GOOD LIVES presents J.K. Rowling’s words of wisdom for anyone at a turning point in life. How can we embrace failure? And how can we use our imagination to better both ourselves and others?

Drawing from stories of her own post-graduate years, the world-famous author addresses some of life’s most important questions with acuity and emotional force.

The Hazel Wood by Melissa Albert
3 Stars
Add to Goodreads

Seventeen-year-old Alice and her mother have spent most of Alice’s life on the road, always a step ahead of the uncanny bad luck biting at their heels. But when Alice’s grandmother, the reclusive author of a cult-classic book of pitch-dark fairy tales, dies alone on her estate, the Hazel Wood, Alice learns how bad her luck can really get: her mother is stolen away―by a figure who claims to come from the Hinterland, the cruel supernatural world where her grandmother’s stories are set. Alice’s only lead is the message her mother left behind: “Stay away from the Hazel Wood.”

Alice has long steered clear of her grandmother’s cultish fans. But now she has no choice but to ally with classmate Ellery Finch, a Hinterland superfan who may have his own reasons for wanting to help her. To retrieve her mother, Alice must venture first to the Hazel Wood, then into the world where her grandmother’s tales began―and where she might find out how her own story went so wrong.

The ruthless Empress Amara of Kraeshia has taken the Mytican throne, and now uncertainty looms over the three kingdoms. Since Lucia unleashed the fire Kindred, wreaking havoc throughout the land, Myticans have been looking for someone—anyone—they can trust. They believe in Amara, not knowing her grand promises are built on lies.

In Paelsia, Magnus and Cleo reluctantly follow King Gaius to the home of his exiled mother, Selia. Selia is a powerful witch and claims she can help unlock the magic of the Kindred—if the visitors agree to her terms. When Jonas arrives from Kraeshia, he is shocked to find that his rebel army now includes his sworn enemies. Along with Nic, Felix, and the mysteriously resurrected Ashur, the contentious group agrees to cast aside old grudges—for now—and united against their common enemy: Amara.

Meanwhile, bearing the child of a Watcher and feared by all, Princess Lucia travels across Mytica to find her family. But time is running out. The impending storm signals the dark prophecy Timotheus warned her about. Her fate is written, and it includes none other than the rebel Jonas. When their paths collied, Jonas and Lucia must decide between blindly following their destiny or fighting for their own free will.

The battle for power culminates at the Paelsian palace, where Amara resides. Rain pours. Blood spills. And soon all will discover that the darkest magic comes at an even darker price.

As two lethal elemental gods set out to destroy Mytica, sworn enemies must become allies in the final fight to save the kingdoms.

Jonas continues to willfully defy his destiny, but the consequences of plotting his own course are drastic. As the fight for Mytica rages on, he must decide just how much more he’s willing to sacrifice.

Lucia knows there’s something special about her daughter and she’ll do anything to protect her, even if that means facing Kyan alone.

Amara is called back home to Kraeshia. Grandma Cortas has her own plans for Mytica’s future. She promises Amara power, revenge, and dominance if she agrees to be part of her scheme.

Magnus and Cleo‘s love will be put to the ultimate test. Dark magic is causing widespread destruction throughout the kingdom. Enemies across the sea are advancing. And unrest is stirring throughout the land. Is their love strong enough to withstand the outside forces tearing them apart? 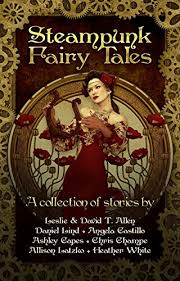 A toyshop owner builds a set of magic clockwork dolls that delight a factory town. A three-inch tall samurai faces a giant iron ogre with only a sewing needle and a coin. A scientist seeks an antidote to his formula gone wrong, with the help of his partner’s beautiful daughter.

All of these stories and more are included in Steampunk Fairy Tales. Written by authors from three different continents, every enchanting tale combines the futuristic Victorian concept of steam and fashion with memorable stories, from the recognizable “Jack and the Beanstalk”, to other popular and unfamiliar works from Germany, France, Italy and Japan.

With steam driven gadgets such as mechanical goggles, hoverboards, and an orchestra of automatons. Steampunk Fairy Tales is a charming and unique collection of works for current lovers of the genre, and those just diving in. 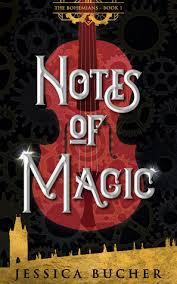 Notes of Magic by Jessica Bucher
Add to Goodreads