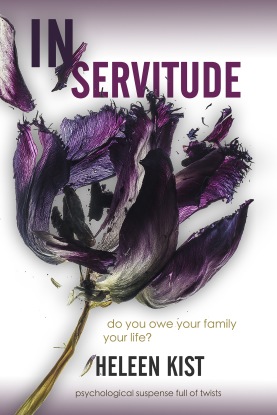 Synopsis:
Do you owe your family your life?

When her beloved sister Glory dies in a car crash, Grace McBride’s carefully considered life spirals out of control. She discovers Glory had been sucked into illegal activities at odds with her seemingly charmed existence. What’s worse: Grace finds herself an unwitting accomplice and forced to take over the shady dealings.

Determined to keep her fingers clean and redeem her sister’s reputation, Grace plots to extricate herself—and those Glory held dear—from the clutches of Glasgow’s criminal underworld. But her moral certitude is challenged when familial pressure mounts and Glory’s past intentions remain unclear. Grace grows convinced Glory’s death was no accident, even if no-one will listen.

Heleen Kist is a Dutch quintilingual Stanford-educated globetrotting career woman who fell in love with a Scotsman and his country, and now writes about its (sometimes scary) people from her garden office in Glasgow. Trained at work to spot and prevent financial crime, she put this knowledge to good use for her debut novel, In Servitude.