This weeks reading did not go as well as it has been for the last few weeks.  I feel like I am in a slump and I’m just not excited to read anything really.  I think this has some  to do with the book that I DNF’d more of my thoughts on that will be in my review that is to come this week.

The Coven Princess by Lily Luchesi
Not comfortable with rating DNF’d books.
Add to Goodreads

Your blood does not define you.
Harley Torrance’s parents were killed in a home invasion when she was three. Adopted by a nice couple, Harley begins to develop strange powers. At fourteen she brews a potion so strong it gains the attention of the Coven King, and changes her world forever.
She’s not human, she’s a witch.
Now a part of the magical community, Harley must learn to control her powers lest the Darkness already in her blood overcomes her. Can she dampen her lust for power in order to stop the Dark from taking over the Coven and killing everyone in their way? 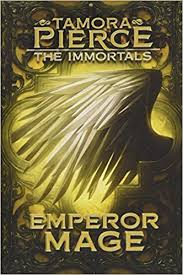 Sent to Carthak as part of the Tortallan peace delegation, Daine finds herself in the middle of a sticky political situation. She doesn’t like the Carthaki practice of keeping slaves, but it’s not her place to say anything — she’s just there to heal the emperor’s birds. It’s extremely frustrating! What’s more, her power has grown in a mysterious way.
As the peace talks stall, Daine puzzles over Carthak’s two-faced Emperor Ozorne. How can he be so caring with his birds and so cruel to his people? Daine is sure he’s planning something. Daine must fight the powerful Emperor Mage, knowing that the safety and peace of the realm depend on stopping Ozorne’s power-hungry schemes.

Worlds collide in this suspenseful, page-turning Falling Kingdoms spin-off series, which explores a whole new side of Mytica—and an even darker version of its magic.

Crystal Hatcher, Modern-day Toronto: It’s a normal afternoon in her mother’s antique bookshop when Crys witnesses the unthinkable: her little sister Becca collapses into a coma after becoming mesmerized by a mysterious book written in an unrecognizable language.

Maddox Corso, Ancient Mytica: Maddox Corso doesn’t think much of it when he spots an unfamiliar girl in his small village. Until, that is, he realizes that she is a spirit, and he is the only one who can see or hear her. Her name is Becca Hatcher, and she needs Maddox to help get her home.

Farrell Grayson, Modern-day Toronto: Rich and aimless Farrell Grayson is thrilled when the mysterious leader of the ultra-secret Hawkspear Society invites him into the fold. But when he learns exactly what he has to do to prove himself, Farrell starts to question everything he thought he knew about family, loyalty, and himself….

Fate has brought these young people together, but ancient magic threatens to rip them apart. 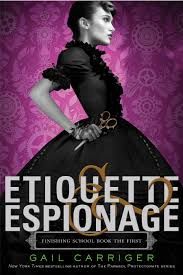 Fourteen-year-old Sophronia is a great trial to her poor mother. Sophronia is more interested in dismantling clocks and climbing trees than proper manners–and the family can only hope that company never sees her atrocious curtsy. Mrs. Temminnick is desperate for her daughter to become a proper lady. So she enrolls Sophronia in Mademoiselle Geraldine’s Finishing Academy for Young Ladies of Quality.

But Sophronia soon realizes the school is not quite what her mother might have hoped. At Mademoiselle Geraldine’s, young ladies learn to finish…everything. Certainly, they learn the fine arts of dance, dress, and etiquette, but they also learn to deal out death, diversion, and espionage–in the politest possible ways, of course. Sophronia and her friends are in for a rousing first year’s education.

I am really hoping that this pulls me out of this slump!