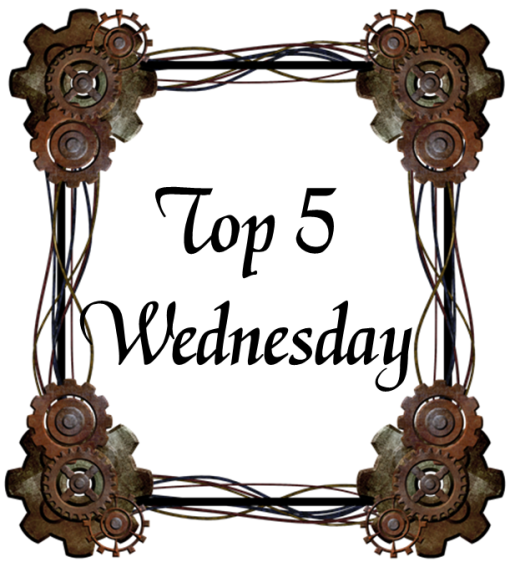 Top 5 Wednesday is a weekly meme created by GingerReadsLainey and now managed by Sam from Thoughts on Tomes. For more information on this meme, visit the Goodreads group.

This weeks theme is: Books You Want to Read Before 2019

This challenge is perfect it allowed me to really sit down and look at what I really wanted to read before the end of the year and only choose 5 rather than me having a pile that is not practical.

The five books that I want to finish before the end of the year are:

Maika Halfwolf is on the run from a coalition of forces determined to control or destroy the powerful Monstrum that lives beneath her skin. But Maika still has a mission of her own: to discover the secrets of her late mother, Moriko.

In this second volume of Monstress, collecting issues 7-12, Maika’s quest takes her to the pirate-controlled city of Thyria and across the sea to the mysterious Isle of Bones. It is a journey that will force Maika to reevaluate her past, present, and future, and contemplate whether there’s anyone, or anything, she can truly trust–including her own body.

A Poison Dark and Drowning by Jessica Cluess
Add to Goodreads

Henrietta doesn’t need a prophecy to know that she’s in danger. She came to London to be named the chosen one, the first female sorcerer in centuries, the one who would defeat the bloodthirsty Ancients. Instead, she discovered a city ruled by secrets. And the biggest secret of all: Henrietta is not the chosen one.

Still, she must play the role in order to keep herself and Rook, her best friend and childhood love, safe. But can she truly save him? The poison in Rook’s system is transforming him into something monstrous as he begins to master dark powers of his own.

So when Henrietta finds a clue to the Ancients’ past that could turn the tide of the war, she persuades Blackwood, the mysterious Earl of Sorrow-Fell, to travel up the coast to seek out strange new weapons. And Magnus, the brave, reckless flirt who wants to win back her favor, is assigned to their mission. Together, they will face monsters, meet powerful new allies, and uncover the most devastating weapon of all: the truth.

The Sign of Four by Arthur Conan Doyle
Add to Goodreads

When a beautiful young woman is sent a letter inviting her to a sinister assignation, she immediately seeks the advice of the consulting detective Sherlock Holmes.

For this is not the first mysterious item Mary Marston has received in the post. Every year for the last six years an anonymous benefactor has sent her a large lustrous pearl. Now it appears the sender of the pearls would like to meet her to right a wrong.

But when Sherlock Holmes and his faithful sidekick Watson, aiding Miss Marston, attend the assignation, they embark on a dark and mysterious adventure involving a one-legged ruffian, some hidden treasure, deadly poison darts and a thrilling race along the River Thames.

Carols and Chaos by Cindy Anstey
Add to Goodreads

A lady’s maid and a valet become entangled in a yuletide counterfeiting scheme in this romantic Christmas YA adventure.

1817. The happy chaos of the Yuletide season has descended upon the country estate of Shackleford Park in full force, but lady’s maid Kate Darby barely has the time to notice. Between her household duties, caring for her ailing mother, and saving up money to someday own a dress shop, her hands are quite full. Matt Harlow is also rather busy. He’s performing double-duty, acting as valet for both of the Steeple brothers, two of the estate’s holiday guests.

Falling in love would be a disaster for either of them. But staving off their feelings for each other becomes the least of their problems when a devious counterfeiting scheme reaches the gates of Shackleford Park, and Kate and Matt are unwittingly swept up in the intrigue. Full of sweetness, charm, and holiday shenanigans, Carols and Chaos is perfect for fans of Jane Austen and Downton Abbey.

What books are you hoping to get to before the end of the year?