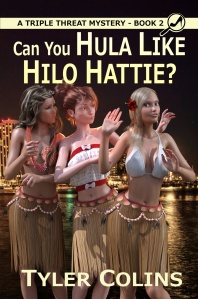 The novice sleuths accept their first official detecting assignment: uncovering the “secret” of an elderly millionaire’s pretty young wife. If they succeed, their newly founded business, The Triple Threat Investigation Agency, will prove a viable venture.

The twist: the wife is found murdered along Oahu’s sapphire shores. And there’s a secret all right, one of many, but they’re not all the deceased woman’s. Who of the unconventional cast of characters is the murderer? As JJ (Jill), Rey and Linda begin fitting puzzle pieces together, they stumble upon a few more bodies.

A straightforward task becomes anything but. They’ve dealt with murderers in past, however, thanks to a wacky “collect your inheritance” week in Connecticut; while this new set of quirky personalities proves equally taxing, they have enough faith in their [budding] talents to persevere and unscramble clues.

Here’s an opportunity for the women to prove they made a wise choice in becoming bona fide detectives. Can they do it before the murderer strikes again?

The aspiring detectives of the Triple Threat Investigation Agency take on their first official paying assignment: discover the secret of an elderly millionaire’s young wife.

It seems straightforward enough—until the wife is found dead in the sapphire Hawaiian oceanside.  As Jill (JJ), Rey and Linda strive to uncover the killer amid a cast of curious, unconventional characters, they stumble across several secrets and fall over a few bodies.

Piecing together the puzzle detours the trio—to the domains of drug pushers, informants, and gangs.  Serious game players, they play for keeps.  Does the trio possess enough shrewdness and savvy to beat the odds and win the game?

Carmie was the main focus of the mission, so I dug around and discovered her name at birth had been Carpella.  She’d been born in Tenafly New Jersey to Joseph Leone Carpella, the owner of a popular local pizza shop on Washington Street, and Lina Spera, a former aesthetician.  Gino, Carmie’s fraternal twin brother, was currently a prominent businessman in New York.  At a young age, he’d recognized there was money to be made in food that drew townspeople for blocks.  A well-conceived business plan, leg power, and lots of charm resulted in his papa’s delicious pizzas becoming available beyond a twenty-block radius.  In record time, Papa Jo Leone’s product moved beyond the borders of the borough, across the state, and then the nation.

At twenty-five Gino made his first million.  Papa and Mama Carpella remained in Tenafly, but instead of living over the pizza parlor, resided in a lovely six-bedroom house with enough garden space to grow fifty bushels of Roma tomatoes.

While sister was slim, brother was heavy, not from fat, but muscle.  In an interview with Fortune Magazine, Gino had talked about an obsession with staying fit (evidently, it ran in the twins’ veins), but his went beyond the physical.  In addition to daily one-hour workouts at 5:00 a.m., he hit the books frequently to engage the gray matter.  He’d even made it an objective to take two university courses every year.

As I drove to Kalihi, I considered all the information gleaned so far.  It was edifying, but pretty rudimentary.  Would it prove worthwhile and time efficient to dig deeper?  We had to prove Carmie was having an affair at the very least, but discovering she was into something illicit or that she had something to hold over her husband would be best.  Did the past matter?  Probably not, other than maybe demonstrating she’d been a flirt or skank.  That would go to character and integrity and all that.  But if she’d been a flirt or skank, wouldn’t William have discovered that?  Surely he’d have learned all he could about Carmelita Sangita Carpella before he’d married her.

And why marry someone of such a common background?  Was it true love?  Or a need to prove virility and/or have a trophy wife?  William’s first wife, Lucy, had been born to an aristocratic English family.  Fox hunts, high teas and Harrods had been part of the Howell’s routine—until she’d passed at the age of thirty, after five years of marriage.  A misadventure with a bunch of boisterous beagles during a fox hunt in Kent had cut her privileged life very short.  Like Carmie, she was slim and approximately 5’4” tall, blonde and blue-eyed.  Her nose, set between two incredibly high cheekbones, was quite pronounced.  Some might have called it Patrician if they’d been feeling kind, while others who were more candid might have called it for what it was: a Gonzo (as in Muppet) proboscis.  Snout, uh, nose aside, Lucy’s face held a noble and haughty air.

William remained single for four years and then met Lowella, the daughter of a Greek olive tycoon.  A whirlwind romance ensued.  They were married not quite eight months when daughter Sophia Bella was born.  Lowella passed after five years of marriage when a tractor-trailer totaled her and a Jaguar in oatmeal-thick fog along California’s SR 1.  Poor William.  He wasn’t particularly lucky in the sustainable marriage-love department.

I pulled into the Kalihi district and found a small parking lot in a tiny strip mall.  Before stepping from the car, I peered into the rearview mirror.  The peacock-blue cotton sun hat looked okay, but dark circles under the eyes didn’t.  I should have slapped on make-up, or at the very least concealer and lipstick, but really, why should I care that I looked tired and edgy?  The folks I’d be asking about Xavier wouldn’t.

I eyed a long, white clinic across the road.  Two young people, one scarecrow skinny and one sea-lion blubbery, shuffled from the entrance, whispered excitedly and anxiously shambled onward.  It was as good a place to start as any.  Maybe Xavier had dropped in.

My career as P.I. had officially begun.  Hopefully, in the process, I wouldn’t blow it—or get “blown”, as into bitty pieces.  What did I know about druggies and dealers other than what I’d heard at the stations I’d worked at or viewed on the idiot box, as Great-Uncle Warren called television?  My father’s uncle was the only relative I had ever known on that side of the family.  I’d never even met my dad.  When I’d been a baby, he’d taken a fatal roll down Mount Kilimanjaro during a botanical exploration (so the story went).

These folks had been babies once, too.  Innocent, trusting infants with lives to live and dreams to make happen.  . . . Or destroy.  Sometimes we made wrong choices; sometimes others made them for us.  And sometimes life simply wasn’t fair. 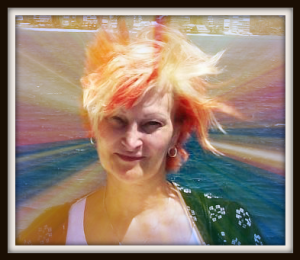 Tyler Colins is a fiction writer and blogger, and a sometimes editor and proofreader (books, manuals, and film/television scripts).  She’s also been known to create business plans, synopses and outlines, and film promotion documents.

Fact-checking and researching, organizing and coordinating are both skills and joys (she likes playing detective and developing structure).

She aims to provide readers with smiles and chuckles like the ever-talented Janet Evanovich and missed Lawrence Sanders, the “coziness” of Jessica Fletcher, and a few diversions and distractions as only long-time pros Jonathan Kellerman and Kathy Reichs can craft. 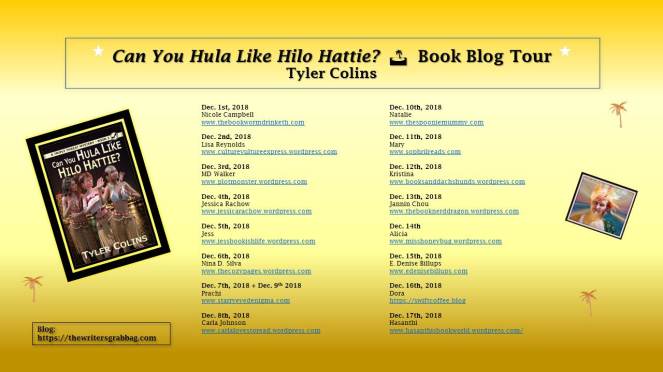