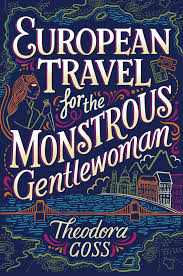 Synopsis
In the sequel to the critically acclaimed The Strange Case of the Alchemist’s Daughter, Mary Jekyll and the rest of the daughters of literature’s mad scientists embark on a madcap adventure across Europe to rescue another monstrous girl and stop the Alchemical Society’s nefarious plans once and for all.

Mary Jekyll’s life has been peaceful since she helped Sherlock Holmes and Dr. Watson solve the Whitechapel Murders. Beatrice Rappaccini, Catherine Moreau, Justine Frankenstein, and Mary’s sister Diana Hyde have settled into the Jekyll household in London, and although they sometimes quarrel, the members of the Athena Club get along as well as any five young women with very different personalities. At least they can always rely on Mrs. Poole.

But when Mary receives a telegram that Lucinda Van Helsing has been kidnapped, the Athena Club must travel to the Austro-Hungarian Empire to rescue yet another young woman who has been subjected to horrific experimentation. Where is Lucinda, and what has Professor Van Helsing been doing to his daughter? Can Mary, Diana, Beatrice, and Justine reach her in time?

Racing against the clock to save Lucinda from certain doom, the Athena Club embarks on a madcap journey across Europe. From Paris to Vienna to Budapest, Mary and her friends must make new allies, face old enemies, and finally confront the fearsome, secretive Alchemical Society. It’s time for these monstrous gentlewomen to overcome the past and create their own destinies.

What I thought
This is the second book in The Extraordinary Adventures of the Athena Club the first book being The Strange Case of the Alchemists Daughter (see my thoughts here). Let me start by saying that this book is very long and it took me much longer to read than I thought it would. Now with that said I really enjoyed the ride that this book gave me. I love the friendship between these characters. It feels like a real friend group. They talk about how they do get on one anothers nerves, and how that also makes them all fit together.  Everyone brings there own uniqueness to the group and life is not rainbows and butterflies.

In this installment, they are traveling across Europe to rescue Lucinda Van Helsing. So I am going to say that you should know that last name and that it means vampires. I really like how this author can continue to add new characters to this series and it does not get overwhelming for the reader. I really like how the characters stay themselves, they do have growth however they are never magically changed to where you no longer recognize them.

If you have read the first one you know that there is a going commentary between the characters in the story on the manuscript.  I am always surprised by how much I enjoy this. It feels like you are seeing the characters not just how they are portrayed but how they think and feel about what is being said about them.  To me this makes them feel more real and I love it.

Could this book have been trimmed down some and not been over 700 pages and still been good? I think so and I have noticed that this is an ongoing complaint from a lot of the readers.  So here is to hoping that the next installment will be a little shorter.