Kiss of Steel by Bec McMaster
4.5 Stars
Add to Goodreads

When Nowhere Is Safe

Most people avoid the dreaded Whitechapel district. For Honoria Todd, it’s the last safe haven. But at what price?

Blade is known as the master of the rookeries—no one dares cross him. It’s been said he faced down the Echelon’s army single-handedly, that ever since being infected by the blood-craving he’s been quicker, stronger, and almost immortal.

When Honoria shows up at his door, his tenuous control comes close to snapping. She’s so…innocent. He doesn’t see her backbone of steel—or that she could be the very salvation he’s been seeking.

When New Yorker Rachel Chu agrees to spend the summer in Singapore with her boyfriend, Nicholas Young, she envisions a humble family home and quality time with the man she hopes to marry. But Nick has failed to give his girlfriend a few key details. One, that his childhood home looks like a palace; two, that he grew up riding in more private planes than cars; and three, that he just happens to be the country’s most eligible bachelor.

On Nick’s arm, Rachel may as well have a target on her back the second she steps off the plane, and soon, her relaxed vacation turns into an obstacle course of old money, new money, nosy relatives, and scheming social climbers.

Current Reads:
I am not sure which one I will be picking up so I am going to put the three books that I am looking at. 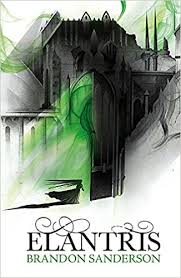 Elantris was the capital of Arelon: gigantic, beautiful, literally radiant, filled with benevolent beings who used their powerful magical abilities for the benefit of all. Yet each of these demigods was once an ordinary person until touched by the mysterious transforming power of the Shaod. Ten years ago, without warning, the magic failed. Elantrians became wizened, leper-like, powerless creatures, and Elantris itself dark, filthy, and crumbling.

Arelon’s new capital, Kae, crouches in the shadow of Elantris. Princess Sarene of Teod arrives for a marriage of state with Crown Prince Raoden, hoping — based on their correspondence — to also find love. She finds instead that Raoden has died and she is considered his widow. Both Teod and Arelon are under threat as the last remaining holdouts against the imperial ambitions of the ruthless religious fanatics of Fjordell. So Sarene decides to use her new status to counter the machinations of Hrathen, a Fjordell high priest who has come to Kae to convert Arelon and claim it for his emperor and his god.

But neither Sarene nor Hrathen suspect the truth about Prince Raoden. Stricken by the same curse that ruined Elantris, Raoden was secretly exiled by his father to the dark city. His struggle to help the wretches trapped there begins a series of events that will bring hope to Arelon, and perhaps reveal the secret of Elantris itself.

A rare epic fantasy that doesn’t recycle the classics and that is a complete and satisfying story in one volume, Elantris is fleet and fun, full of surprises and characters to care about. It’s also the wonderful debut of a welcome new star in the constellation of fantasy.

In the stews of London’s East End, an outbreak of insanity sees ordinary men and women reduced to gibbering, incoherent wrecks; a mysterious creeping fog hides terrifying apparitions within that rob the wits of all who see them and even inspire suicide.

Sherlock Holmes, in the infancy of his detecting career, deduces a connection between these sinister “shadows” and an Oriental drug lord who is bent on expanding his criminal empire. Yet there are even more sinister forces at work, as the great detective faces a challenge so fearsome and deadly that his career may be over almost as soon as it has begun.

An alternate Victorian world controlled by clock towers, where a damaged clock can fracture time—and a destroyed one can stop it completely.

A prodigy mechanic who can repair not only clockwork but time itself, determined to rescue his father from a Stopped town.

A series of mysterious bombings that could jeopardize all of England.

A romance that will shake the very foundations of time.