The Minimalist Home: A Room-By-Room Guide to a Decluttered, Refocused Life
by Joshua Becker
3 Stars
Add to Goodreads

One of today’s most influential minimalist advocates takes us on a decluttering tour of our own houses and apartments, showing us how to decide what to get rid of and what to keep. He both offers practical guidelines for simplifying our lifestyle at home and addresses underlying issues that contribute to over-accumulation in the first place. The purpose is not just to create a more inviting living space. It’s also to turn our life’s HQ–our home–into a launching pad for a more fulfilling and productive life in the world. 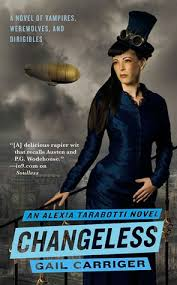 Alexia Tarabotti, the Lady Woolsey, awakens in the wee hours of the mid-afternoon to find her husband, who should be decently asleep like any normal werewolf, yelling at the top of his lungs. Then he disappears – leaving her to deal with a regiment of supernatural soldiers encamped on her doorstep, a plethora of exorcised ghosts, and an angry Queen Victoria.

But Alexia is armed with her trusty parasol, the latest fashions, and an arsenal of biting civility. Even when her investigations take her to Scotland, the backwater of ugly waistcoats, she is prepared: upending werewolf pack dynamics as only the soulless can.

The Witch’s Tower by Tamara Grantham
Add to Goodreads

Gothel is a witch. Punished for the actions of her mother, her choice is simple: either she stands guard over Princess Rapunzel — or she dies. But just because a choice is easy doesn’t mean it’s pleasant. Protecting Rapunzel means watching as the princess lays trapped in a tower, bedridden by hair that is so long and heavy it’s slowly driving her insane. Gothel’s life has become one of imprisonment and solitude as well — until a prince and his handsome squire appear at the tower.

Only one object can cut Rapunzel’s hair and end the curse: a pair of magical shears. But the shears are guarded by the most terrifying witches in the land, who also happen to be Gothel’s aunts. As Gothel and the prince’s squire, Raj Talmund, work to form a plan, she finds herself more and more drawn to the mysterious young man from the Outerlands. Unfortunately, his destiny is far more dangerous than she wants to admit: to save a princess, he must kill the witch who’s been forced to guard her.

I Am Malala: The Story of the Girl Who Stood Up for Education and Was Shot by the Taliban by Malala Yousafzai, Christina Lamb
Add to Goodreads

I come from a country that was created at midnight. When I almost died it was just after midday.

When the Taliban took control of the Swat Valley in Pakistan, one girl spoke out. Malala Yousafzai refused to be silenced and fought for her right to an education.

On Tuesday, October 9, 2012, when she was fifteen, she almost paid the ultimate price. She was shot in the head at point-blank range while riding the bus home from school, and few expected her to survive.

Instead, Malala’s miraculous recovery has taken her on an extraordinary journey from a remote valley in northern Pakistan to the halls of the United Nations in New York. At sixteen, she has become a global symbol of peaceful protest and the youngest-ever Nobel Peace Prize laureate.

I Am Malala is the remarkable tale of a family uprooted by global terrorism, of the fight for girls’ education, of a father who, himself a school owner, championed and encouraged his daughter to write and attend school, and of brave parents who have a fierce love for their daughter in a society that prizes sons.