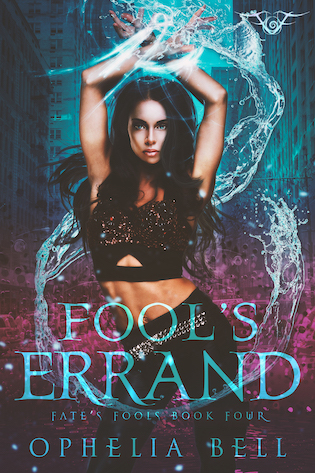 You never know what you’ve got until it’s gone. In my case that was literal – I had Ozzie West’s soul and didn’t know it, but now it’s been torn from me and him along with it. I’m afraid I will never get him back.

My heart is broken.

My three mates may try to fill that void, but they don’t understand what he meant to me. They can’t see the memories unlocked by Fate.

Only one man can help, but he’s the one man I’m afraid I can never trust again.

“Sing with me,” I whispered as I began to move. I lifted my wet hands from his shoulders to his temples, raking my fingers through his damp curls and holding on, my grip forcing his head to tilt back.

Rohan’s golden gaze fixed on my face, his eyelids fluttering slightly and his breath coming quicker as I fucked him. “Are you sure?”

He gripped my hips with both hands and took a deep breath. His exhale became a long, plaintive note, his brows creasing with the tension of the first verse of a song to accompany our lovemaking.

The music was the perfect mix of hungry and sweet, and I clung to him as the notes settled inside me. I ached to join in when the tension of the pleasure coiled so tight I needed an outlet before I came too fast, but my voice betrayed me once again. When I tried to sing, the sound just came out as a pitiful croak, so I clamped my mouth shut, focusing on the pleasure to hold back the tears.

I buried my face in his neck, my moan half pleasure, half despair. Rohan stroked the back of my neck, halting mid-verse. “It’ll come back to you, baby. I promise. I’m proof you don’t need a turul soul to sing.”

“Just make love to me,” I whispered, pulling back to look into his eyes. He gazed intently back at me, brow creased and jaw clenched, betraying how my own hurt affected him just as acutely.

I took a deep breath and started rocking my hips again, focusing on the pleasure of our connection as he resumed the song. The music truly helped, even if I couldn’t join in without an instrument.

I let myself get lost in the rhythm he set and the deep notes that rose above the steam. I could draw the pleasure out with him, trusting that he’d let me know when he’d given too much. Rohan urged me on, holding tighter and shifting his hips into mine at a quicker tempo.

The lyrics to the song gave way to his cries of pleasure as we crested together, both of us finding our climax at the same second amid sloshing water and slippery, gasping kisses. Rohan’s strained expression fell into laughter as he relaxed, his skin glowing faintly with my iridescent magic and my own skin glimmering golden and wet.

I sank against him with a sigh, grateful for yet another reprieve from the ever-encroaching threat to my sanity and the added disappointment of losing my voice. Perhaps with enough time and their continued attention, that need would fade and my songs would return. For now, I would enjoy the lucidity when I had it and let them do the singing for me.

Ophelia Bell loves a good bad-boy and especially strong women in her stories. Women who aren’t apologetic about enjoying sex and bad boys who don’t mind being with a woman who’s in charge, at least on the surface, because pretty much anything goes in the bedroom.

Ophelia grew up on a rural farm in North Carolina and now lives in Los Angeles with her own tattooed bad-boy husband and four attention-whoring cats.

One thought on “Book Blitz: Fool’s Errand by Ophelia Bell”