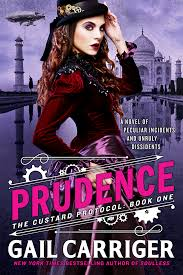 When Prudence Alessandra Maccon Akeldama (Rue to her friends) is given an unexpected dirigible, she does what any sensible female would under similar circumstances – names it the Spotted Custard and floats to India in pursuit of the perfect cup of tea. But India has more than just tea on offer. Rue stumbles upon a plot involving local dissidents, a kidnapped brigadier’s wife, and some awfully familiar Scottish werewolves. Faced with a dire crisis and an embarrassing lack of bloomers, what else is a young lady of good breeding to do but turn metanatural and find out everyone’s secrets, even thousand-year-old fuzzy ones?

Miss Lydia Whitfield, heiress to the family fortune, has her future entirely planned out. She will run the family estate until she marries the man of her late father’s choosing, and then she will spend the rest of her days as a devoted wife. Confident in those arrangements, Lydia has tasked her young law clerk, Mr. Robert Newton, to begin drawing up the marriage contracts. Everything is going according to plan.

Until Lydia—and Robert along with her—is kidnapped. Someone is after her fortune and won’t hesitate to destroy her reputation to get it. With Robert’s help, Lydia strives to keep her family’s good name intact and expose whoever is behind the devious plot. But as their investigation delves deeper and their affections for each other grow, Lydia starts to wonder whether her carefully planned future is in fact what she truly wants… 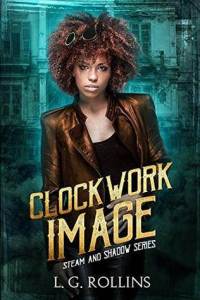 Vandals and Vampires Beware:
Tressa won’t let anyone stand in her way.

After years maintaining engines and repairing machines, Seawoman Tressa Wimple has come into a shockingly large sum of money. It only takes Tressa a single breath to decide what to do—she will donate it all to Westwood Orphanage, a home for children who are otherwise bound for the streets. They saved her and her brother many decades ago; now, she wants nothing more than to reach out a hand to the small and helpless of London.

All her plans are derailed, however, when a faceless adversary decries Westwood and claims that the orphanage is a front for something far darker; as dark as an alleyway where Tressa first rescues a boy from a vampire. With the help of her brother, Jasper, and the tall, alluring Brox, Tressa determines to get to the bottom of the claims and protect the children, regardless of the risks.

When all that is dark is forced into the light, Tressa must face her most combustible problem yet: her own past.

One thousand years ago, a wish was made to the Harbinger of Change and a sword of rage and lightning was forged. Kamigoroshi. The Godslayer. It had one task: to seal away the powerful demon Hakaimono.

Now he has broken free.

Kitsune shapeshifter Yumeko has one task: to take her piece of the ancient and powerful scroll to the Steel Feather temple in order to prevent the summoning of the Harbinger of Change, the great Kami Dragon who will grant one wish to whomever holds the Scroll of a Thousand Prayers. But she has a new enemy now. The demon Hakaimono, who for centuries was trapped in a cursed sword, has escaped and possessed the boy she thought would protect her, Kage Tatsumi of the Shadow Clan.

Hakaimono has done the unthinkable and joined forces with the Master of Demons in order to break the curse of the sword and set himself free. To overthrow the empire and cover the land in darkness, they need one thing: the Scroll of a Thousand Prayers. As the paths of Yumeko and the possessed Tatsumi cross once again, the entire empire will be thrown into chaos.