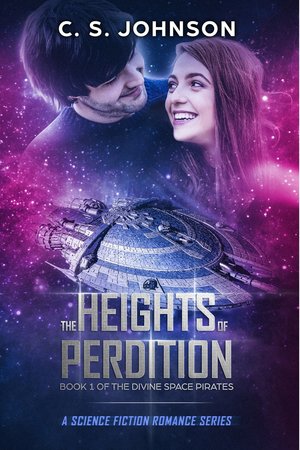 There is nothing Aeris St. Cloud wants more than to win her father’s love and the acceptance of her family unit by joining the Military Academy at New Hope. But after she is captured by the fearsome space pirate, Captain Chainsword, Aerie is certain falling in love with her nation’s arch enemy is the last possible way to earn their coveted esteem.

Driven by vengeance, Exton Shepherd never set out to save anyone. As he circles the war-torn world in his pirated starship, the Perdition, he only sees his father’s ghost lurking around every corner and the looming darkness on the horizon. When Aerie unexpectedly tumbles into his life, he finds he cannot trust her, anymore than he can ignore her. But just like the raging war down on Earth, it’s tempting to think he can …

When the war ascends to the heights of the Perdition, Aerie’s loyalty, and Exton’s heart, are put to the test. But will love be enough to save them – and others – from certain destruction?

Etoileon smiled as he pulled out his special gift for Selene—having taken Ronal’s earlier advice, he had a tiny bouquet of deep red ekedlets, small minuscule flowers that smelled like sweet fruit. The ekedlets were tied together with a small yellow ribbon. He’d thought that the small gift would be perfect for her. It had taken him a while to get them, too. He was only allowed into the city, along with the other members of the Palace crew, only twice a month. Etoileon was lucky that he’d known the streets well enough to know where to go so he could get back in time to escort Selene down to the ballroom entrance.

The city was crowded for the opening of the reception. Etoileon had run into more than one person trying to reach his destination, Madame Flora’s Shop. Though he had meant to hurry up, Etoileon slowed down to look around, amazed to see just how the streets had changed to him in so short a time.

He’d been raised on the streets, mostly all alone.

It had been a miracle that he had survived there, let alone to manage to get a job in the Diamond City Palace, considering a job at the palace was a highly coveted position in society. Middle class children often took jobs in the palace, using their connections to be introduced into the flashy world of riches and wealth. After a number of years, they were able to use their earned capital to be educated in the way of society. Using the skills they would acquire from training and teaching of their instructors and parents, the now young adults would be able to be placed in a position where it was likely for a marriage to be arranged or sought after.

Etoileon had none of this.

He had no parents, no real family, few allies … there were plenty of untrustworthy people, enemies, and dangers around every corner. All he had were survival skills, and the good fortune to happen to be in the right place at the right time. As Etoileon leaned back on the tower wall, he thought about the night that he’d met Selene. He did not get too lost in his memories. The Palace was beginning to feel more like home to him as time went on, and his memories of the darker times of his life were beginning to fade.

It was a moment later that the door opened and Selene walked into the Tower room as well.

“Etoileon,” she greeted him, her eyes quickly losing their flicker of surprise and replacing it with an expression of warmth. “I did not think you would be up here this early.”

“You are,” he pointed out, a small smile forming on his face.

“Well,” Selene blushed, “There was something I wanted to do before later.”

“You mean before I came?” Etoileon asked. “What was it?”

“Well … ” Her face had turned even redder, and she looked away as she reached behind her and pulled out a small bag. “I wanted to give this to you later, but I have no objections to giving it to you a little early.”

Etoileon looked down at the bag she placed delicately in his hand. It had been carefully prepared for him, he could tell. The bag was all dressed up, tiny curls of ribbons surrounding the drawstrings of the sack, and made from cheerfully colored fabric.

Selene nodded. “Open it, Etoileon. It’s for you.”

Inside the bag, he found a small silver-framed photograph of Selene and him from a few years ago. It was when he had first undergone his training for the Fighter squad. Selene was sitting in front of him in the picture, while he was standing behind her. He could tell that his eyes had been focused on her; Etoileon figured that he must have missed the camera. His eyes examined the picture closely, running over Selene’s face again and again.

“I don’t remember this picture,” he said slowly.

“It’s from the time that you came storming out of the Fighter’s training room, remember? You were not too happy, I recall. My memory of the reason has faded, but I remember thinking you needed me there,” she said in a hushed voice. “I still come to watch, sometimes.”

I still need you there, he thought. But he could not say that. So instead, he looked over at her intently, and said, “Thank you.”

“So you like it?” Her smile seemed to brighten up the entire evening sky.

“Very much,” he nodded. “That must’ve been the day that Master Norio told me in front of everyone that I had been poorly trained and it would be a miracle if I amounted to anything.”

Selene’s sad smile flitted to her lips. “Poor Master Norio. That has to be the most incorrect he’s ever been.”

For a chance to win either a digital copy or audiobook version of The Heights of Perdition, click the link below! 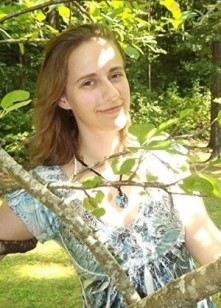 C. S. Johnson is the award-winning, genre-hopping author of several novels, including young adult sci-fi and fantasy adventures such as the Starlight Chronicles, the Once Upon a Princess saga, and the Divine Space Pirates trilogy. With a gift for sarcasm and an apologetic heart, she currently lives in Atlanta with her family. Find out more at http://www.csjohnson.me