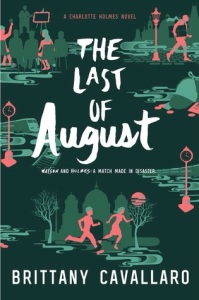 Watson and Holmes: A match made in disaster.

Jamie Watson and Charlotte Holmes are looking for a winter-break reprieve after a fall semester that almost got them killed. But Charlotte isn’t the only Holmes with secrets, and the mood at her family’s Sussex estate is palpably tense. On top of everything else, Holmes and Watson could be becoming more than friends—but still, the darkness in Charlotte’s past is a wall between them.

A distraction arises soon enough, because Charlotte’s beloved uncle Leander goes missing from the estate—after being oddly private about his latest assignment in a German art forgery ring. The game is afoot once again, and Charlotte is single-minded in her pursuit.

Their first stop? Berlin. Their first contact? August Moriarty (formerly Charlotte’s obsession, currently believed by most to be dead), whose powerful family has been ripping off famous paintings for the last hundred years. But as they follow the gritty underground scene in Berlin to glittering art houses in Prague, Holmes and Watson begin to realize that this is a much more complicated case than a disappearance. Much more dangerous, too.

What they learn might change everything they know about their families, themselves, and each other.

It’s been a year since the shocking death of August Moriarty, and Jamie and Charlotte haven’t spoken.

Jamie is going through the motions at Sherringford, trying to finish his senior year without incident, with a nice girlfriend he can’t seem to fall for.

Charlotte is on the run, from Lucien Moriarty and from her own mistakes. No one has seen her since that fateful night on the lawn in Sussex—and Charlotte wants it that way. She knows she isn’t safe to be around. She knows her Watson can’t forgive her.

Holmes and Watson may not be looking to reconcile, but when strange things start happening, it’s clear that someone wants the team back together. Someone who has been quietly observing them both. Making plans. Biding their time.

Someone who wants to see one of them suffer and the other one dead.

Long live Solaris. One bloodthirsty ruler has been overthrown by another, casting the shadow of death over the Solaris Empire. Vhalla Yarl stands upon the stage of fate, prepared to do battle one final time. Fragile alliances will be tested and new bonds will be formed as the world is reshaped. She fights as the champion of peace, but when the night is darkest will she be able to pay the price of a new dawn?

In a desperate bid to keep her fortune out of her cousin’s hands, shipping heiress Georgiana Caversteed marries a condemned criminal in Newgate prison. The scoundrel’s first kiss is shockingly heated, but Georgie never expects to see her husband again. Until she spots him across a crowded ballroom. Notorious rogue Benedict Wylde never expected a wife. He was in Newgate undercover, working for Bow Street. To keep their marriage of convenience a secret, Wylde courts Georgie in public, but the more time they spend together, the more their attraction sparks. Could an heiress with the world at her feet find happiness with a penniless rake? Kate Bateman’s This Earl of Mine is a delightful start to the Bow Street Bachelors series, with witty banter, dynamic characters, and swoon-worthy romance. 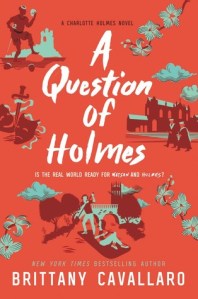 Charlotte Holmes and Jamie Watson think they’re finally in the clear. They’ve left Sherringford School—and the Moriartys—behind for a pre-college summer program at Oxford University. A chance to start from scratch and explore dating for the first time, while exploring a new city with all the freedom their program provides. But when they arrive, Charlotte is immediately drawn into a new case: a series of accidents have been befalling the members of the community theater troupe in Oxford, and now, on the eve of their production of Hamlet, they’re starting all over again. What once seemed like a comedy of errors is now a race to prevent the next tragedy—before Charlotte or Jamie is the next victim.

Larry Kavanaugh is an ordinary kind of guy. He’s got a nagging wife and two kids, both annoyingly gifted. No matter what he does, there is no end to what his family needs. What’s a regular, everyday guy to do? Well, he cuts a few corners, obviously – one very big corner. He sells his soul to the Devil.

Maybe it’s not the actual Devil, but Larry is ready to make a deal with one of the Devil’s minions. He meets some demon whose name he can’t remember. Funny, it was right on the tip of his tongue, a name of something you step on. Roach the Demon has sort of good intentions. He just wants a re-write of Dante’s Inferno with himself as the star.

Roach goes after Larry as a rogue operation. He needs to make a point to his boss, Satan, so he uses the body of a human to follow Larry around and stir up trouble. He offers Larry an airtight guarantee that nothing could possibly go wrong. After all, Larry does not feel like he has much to lose – or does he? Even Roach might be in over his head this time.