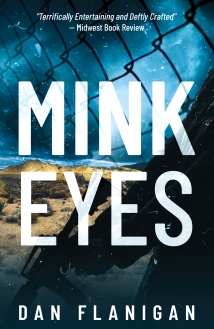 The year is 1986–the tarnished heart of the decade of greed.

Private detective Peter O’Keefe, a physically scarred and emotionally battered Vietnam vet, is hired by childhood friend and attorney Mike Harrigan to investigate what appears to be a petty mink farm Ponzi scheme in the Ozarks. Quickly O’Keefe finds himself snared in a vicious web of money laundering, cocaine smuggling, and murder–all at the behest of a mysterious mobster only referred to as Mr. Canada. Also caught up in Mr. Canada’s illicit network is the exquisite Tag Parker, who seems to dance between roles as the woman of O’Keefe’s dreams–and his nightmares.

From start to finish Mink Eyes delivers classic noir crime fiction at its finest. In a category filled with formulaic and predictable characters and plot lines, reviewers are calling Mink Eyes absolutely “unique and unexpected.”

As he always did when he wasn’t hung over, O’Keefe forced himself into his gym shorts, tee-shirt, socks, and tennis shoes. He moved through the dark apartment toward his exercise room, believing that this was yet another decision, however small and seemingly insignificant, in favor of life and against death, like the times in Vietnam when he had fought off sleep on guard duty. The little men in the black pajamas, the little men who never slept, were just waiting for you to doze off so they could creep into your hole and quietly, and ever so gently, cut your throat.
The apartment occupied the entire bottom floor of an old Victorian house in a re-gentrifying neighborhood in Kansas City. He could sense, though he could not see, Kelly sleeping on the fold-out couch in the living room. She was spending the weekend with him—she under his care, he under hers. The child will save you, he thought.

The digital dial of the clock sitting on the fireplace mantel read 5:12 a.m., 10-4-86. He passed through the living room and into the spare bedroom that he had converted into an exercise room and small home office, flipped on the light, and turned on the TV. The all-news channel headlined a statement from President Reagan concerning the shooting down of a plane over Nicaragua, loaded with supplies for the rebel Contras. The Nicaraguan government claimed that the CIA had sponsored the plane. The U.S. ambassador and CIA denied the charge. In Palm Springs, Florida, the FBI had accomplished the largest drug bust in U.S. history, seizing 4,620 pounds of cocaine, worth$41 million.
. . .
He thought of all the changes he had lived through in the twenty years since 1965 when he had met Kelly’s mother. Big changes, small changes. In ’65, he and his friends would not even say “damn” in front of a girl. By ’69, they would say “fuck” without thinking, and so would most of the girls. In ’65, girls wore brassieres and tried to protect their virginity. By ’69,you could see their bare breasts through their tank tops all up and down the block, and people were fucking in the streets. In ’65, he believed in God and all the other teachings of the Catholic Church. By ’69, he believed in nothing. In ’65, twelve thousand dollars a year put you in the upper middle class. By ’69, it put you in the lower middle class. By now, in 1986, it put you near the poverty line. Everything had exploded in the ’60s, most of all the money supply, and in the ’70s everybody had started chasing all that money. You could buy goods and services in 1975 that you would never have dreamed of being able to buy in 1965, and you were not yet even thirty years old. All you had to do was play the game, help keep the chain letter going. You paid more than you could afford to and sold your life for the income to pay the debt.”

Dan Flanigan is a novelist, poet, and playwright, as well as a practicing lawyer. His novel, Mink Eyes, is set in 1986 and explores the “greed is good” dynamic and the cultural tensions and gender complexities of that era. It is a modern hero’s quest in mystery-detective form. In addition to developing a screenplay version of Mink Eyes, he has published a book of verse and prose poetry, Tenebrae: A Memoir Of Love And Death, and Dewdrops, a collection of his shorter fiction. He has also written the full-length plays–Secrets (based on the life of Eleanor Marx) and Moondog’s Progress (based on the life of Alan Freed). He can be found online at DanFlaniganBooks.com.