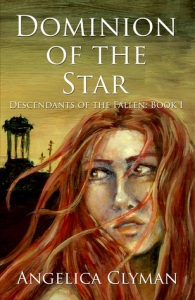 Dominion of the Star by Angelica Clyman
(Descendants of the Fallen Book 1)
Dystopian, Fantasy, Young Adult
Add to Goodreads

Synopsis
The totality of a solar eclipse lasts only a few short minutes. That’s more than enough time for an apocalypse to erupt.

What I thought
I was kindly given a copy of this book by the author. All thoughts and opinions are my own.

When I was sent the synopsis for this book one work stuck out to me ‘Nephilim’.  The concept of Nephilim has always interested me and not it’s not due to the Shadow Hunters books.   Now let me start by saying that I usually do not pick up dystopian books, but because this book had Nephilim in it I decided it was worth a shot. I feel that putting that out there first is important because this was not a bad book just not for me.  I enjoyed it while I was reading it. It kept my attention which is more than I can say for other dystopian books. I just couldn’t get through books like Hunger Games and Divergent, so in my opinion, this book is one up on them.  My issue was picking it back up once I put it down.  Not the book’s fault it was pretty good just not my type of setting.  I did find the concept of the Intercessors to be interesting.

2 thoughts on “Review: Dominion of the Star by Angelica Clyman”