Welcome to my January wrap-up.  I am still on the fence regarding how I want to approach these so they may change from month to month but we will see. In January I read 8 books.

Lady Georgina Kirkpatrick defied her family, jilted her fiancé, and married the man she loved. But when her husband died at Waterloo, she was delivered right back into her father’s power…

Victory is sweet—but England’s triumph was Georgie’s rout. Now that she’s widowed, the loathsome marriage her father first arranged has simply been renegotiated. With neither money nor rights, and nowhere to flee, all she can do is cherish her last weeks of freedom… Until a band of ruffians overtake her carriage and kidnap her. When she escapes in seaside Brighton and encounters her brother’s rather wild friend, Lord St. Just—whom she suspects aspires to be a pirate—she’s prepared to entertain more of his adventurous suggestions than usual…

St. Just knows his mind and his duty, and he loves a challenge. Helping a fair lady make her farewells to hoodlums suits his talents well. Within the hour he has Georgie, her lady’s maid—and her little dog, too—sailing for his castle in Cornwall. Meanwhile, the lady’s entire family, her kidnappers, and her scheming intended are in pursuit. But as he and the indomitable Georgie grow closer, he begins to suspect that together they will prove a match for them all…

A lord in danger. A magician in turmoil. A snowball in hell. Exiled to China for twenty years, Lucien Vaudrey never planned to return to England. But with the mysterious deaths of his father and brother, it seems the new Lord Crane has inherited an earldom. He’s also inherited his family’s enemies. He needs magical assistance, fast. He doesn’t expect it to turn up angry. Magician Stephen Day has good reason to hate Crane’s family. Unfortunately, it’s his job to deal with supernatural threats. Besides, the earl is unlike any aristocrat he’s ever met, with the tattoos, the attitude… and the way Crane seems determined to get him into bed. That’s definitely unusual. Soon Stephen is falling hard for the worst possible man, at the worst possible time. But Crane’s dangerous appeal isn’t the only thing rendering Stephen powerless. Evil pervades the house, a web of plots is closing round Crane, and if Stephen can’t find a way through it-they’re both going to die.

Doctor Isla Cooper is cursed. Literally. Each night, at the stroke of midnight she falls into a death-like sleep from which she cannot be awakened for six hours. To make it worse, the curse has an expiration date—after a year, it becomes permanent. And the year is almost up.

In a desperate attempt to find Malette—the witch who cursed her—Isla blackmails her way onto Daniel Pickett’s private airship bound for the Caribbean, only to discover she’s traveling with three illegal shapeshifters and the despicable Nigel Crowe, a government official determined to hunt down and exterminate every shapeshifter in England. Isla and Daniel must work together to keep the identities of the shapeshifters hidden while coming to terms with their own hidden secrets, and their blossoming attraction to each other.

Filled with suspense, intrigue, and plenty of romance, Kiss of the Spindle is steampunk Sleeping Beauty story. It is a race against the clock as Isla and Daniel try to hunt down the elusive Malette before Isla’s death-like sleep becomes permanent.

From Aaron Mahnke, the creator of the Lore podcast, comes an amazing new supernatural thriller that shines a light on the mysteries and monsters lurking in the shadows. Meet the Duke of Wellington—one of England’s most decorated military heroes and, unknown to most, her most daring monster hunter. The secret history of the Duke of Wellington begins here!

This novella is from Lord Carlston’s perspective and starts at the point in The Dark Days Club when he and Lady Helen meet for the first time.

It is a truth universally acknowledged that only in an overachieving Indian American family can a genius daughter be considered a black sheep.

Dr. Trisha Raje is San Francisco’s most acclaimed neurosurgeon. But that’s not enough for the Rajes, her influential immigrant family who’s achieved power by making its own non-negotiable rules:

Trisha is guilty of breaking all three rules. But now she has a chance to redeem herself. So long as she doesn’t repeat old mistakes.

Up-and-coming chef DJ Caine has known people like Trisha before, people who judge him by his rough beginnings and place pedigree above character. He needs the lucrative job the Rajes offer, but he values his pride too much to indulge Trisha’s arrogance. And then he discovers that she’s the only surgeon who can save his sister’s life.

As the two clash, their assumptions crumble like the spun sugar on one of DJ’s stunning desserts. But before a future can be savored there’s a past to be reckoned with…

A family trying to build home in a new land.

A man who has never felt at home anywhere.

And a choice to be made between the two. 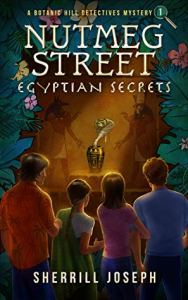 Mrs. Thornsley, desperate for answers, calls in her thirteen-year-old neighbors, the Botanic Hill Detectives—twins Lanny and Lexi Wyatt, Moki Kalani, and Rani Kumar. Their exciting mission? To find the urn and its real thief, bring the criminal to justice, and exonerate Dr. Thornsley so his spotless reputation can be restored.

A roomful of venomous snakes, the poisoned Egyptian pond, and Dragon Pit Man are just a few of the tests awaiting the four tech-savvy teenagers. As the detectives begin to unravel the sinister plot, the mystery takes a dangerous turn. Answers are at their fingertips—if they can only convince their parents to let them solve the case.

Lord Christian Wolverton―known as Wolf in a covert group operating during the war against Napoleon―has been called home from his military duties. For the moment, his family responsibilities require him to suspend his more clandestine activities. But information falls into his hands that a traitor will soon try to tip the scales back into French favor and Christian doesn’t have much time to stop it from happening.

Going to the one person who can help him, the powerful Duke of Huntingdon, Christian comes face to face with Lady Alice. She’s a beautiful member of the ton with a very big secret―she’s also a trained agent and already on the case. Forced to partner with her to lure the traitor out of hiding, Christian wants to quickly close the case himself, before Lady Alice is more closely involved. But Lady Alice has ideas of her own and she’s going to prove her theories correct―with or without him.

Danger is closer than they think, however, and it’s a race against time to expose the traitor’s identity before British lives are endangered. Both Christian and Alice have strong opinions on who he is, but which one will be proven right?

How was your reading month?