Today’s my birthday and I am off of work so I hope to relax today. 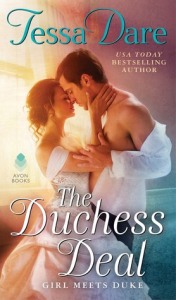 When girl meets Duke, their marriage breaks all the rules…

Since his return from war, the Duke of Ashbury’s to-do list has been short and anything but sweet: brooding, glowering, menacing London ne’er-do-wells by night. Now there’s a new item on the list. He needs an heir—which means he needs a wife. When Emma Gladstone, a vicar’s daughter turned seamstress, appears in his library wearing a wedding gown, he decides on the spot that she’ll do.

His terms are simple:
– They will be husband and wife by night only.
– No lights, no kissing.
– No questions about his battle scars.
– Last, and most importantly… Once she’s pregnant with his heir, they need never share a bed again.

But Emma is no pushover. She has a few rules of her own:
– They will have dinner together every evening.
– With conversation.
– And unlimited teasing.
– Last, and most importantly… Once she’s seen the man beneath the scars, he can’t stop her from falling in love…

He’s been a bad, bad rake—and it takes a governess to teach him a lesson

After her livelihood slips through her fingers, Alexandra Mountbatten takes on an impossible post: transforming a pair of wild orphans into proper young ladies. However, the girls don’t need discipline. They need a loving home. Try telling that to their guardian, Chase Reynaud: duke’s heir in the streets and devil in the sheets. The ladies of London have tried—and failed—to make him settle down. Somehow, Alexandra must reach his heart… without risking her own.

Like any self-respecting libertine, Chase lives by one rule: no attachments. When a stubborn little governess tries to reform him, he decides to give her an education—in pleasure. That should prove he can’t be tamed. But Alexandra is more than he bargained for: clever, perceptive, passionate. She refuses to see him as a lost cause. Soon the walls around Chase’s heart are crumbling… and he’s in danger of falling, hard.

They call him the Duke of Ruin.

To an undaunted wallflower, he’s just the beast next door.

Wealthy and ruthless, Gabriel Duke clawed his way from the lowliest slums to the pinnacle of high society—and now he wants to get even.

Loyal and passionate, Lady Penelope Campion never met a lost or wounded creature she wouldn’t take into her home and her heart.

When her imposing—and attractive—new neighbor demands she clear out the rescued animals, Penny sets him a challenge. She will part with her precious charges, if he can find them loving homes.

Done, Gabriel says. How hard can it be to find homes for a few kittens?

And a two-legged dog.

And a foul-mouthed parrot.

Easier said than done, for a cold-blooded bastard who wouldn’t know a loving home from a workhouse. Soon he’s covered in cat hair, knee-deep in adorable, and bewitched by a shyly pretty spinster who defies his every attempt to resist. Now she’s set her mind and heart on saving him.

Not if he ruins her first. 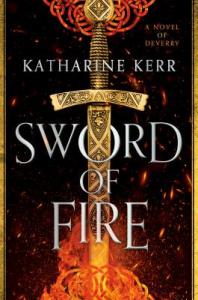 The bards are the people’s voice–and their sword.

All over the kingdom of Deverry, the common people are demanding reform of the corrupt law courts. In Aberwyn, the situation catches fire when Gwerbret Ladoic, second in authority only to the High King, allows a bard to starve to death rather than hear their grievances.

Guildwoman Alyssa, a student at the local scholars’ collegium, and Lady Dovina, the gwerbret’s own daughter, know that evidence exists to overthrow the so-called traditional legal system, if they can only get it into the right hands. The powerful lords will kill anyone who threatens their privileges.

To retrieve the proof, Alyssa must make a dangerous journey that will either change her life forever–or end it.

To Have and to Hoax by Martha Waters
Historical, Regency Romance
Add to Goodreads

In this fresh and hilarious historical rom-com, an estranged husband and wife in Regency England feign accidents and illness in an attempt to gain attention—and maybe just win each other back in the process.

Five years ago, Lady Violet Grey and Lord James Audley met, fell in love, and got married. Four years ago, they had a fight to end all fights, and have barely spoken since.

Their once-passionate love match has been reduced to one of cold, detached politeness. But when Violet receives a letter that James has been thrown from his horse and rendered unconscious at their country estate, she races to be by his side—only to discover him alive and well at a tavern, and completely unaware of her concern. She’s outraged. He’s confused. And the distance between them has never been more apparent.

Wanting to teach her estranged husband a lesson, Violet decides to feign an illness of her own. James quickly sees through it, but he decides to play along in an ever-escalating game of manipulation, featuring actors masquerading as doctors, threats of Swiss sanitariums, faux mistresses—and a lot of flirtation between a husband and wife who might not hate each other as much as they thought. Will the two be able to overcome four years of hurt or will they continue to deny the spark between them?