Sorry, this is later than when I normally post but I just can not decide what reading mood I am in.  So I grabbed the three books that I started over the weekend and a book I really want to start and we will how this goes.

The bards are the people’s voice–and their sword.

All over the kingdom of Deverry, the common people are demanding reform of the corrupt law courts. In Aberwyn, the situation catches fire when Gwerbret Ladoic, second in authority only to the High King, allows a bard to starve to death rather than hear their grievances.

Guildwoman Alyssa, a student at the local scholars’ collegium, and Lady Dovina, the gwerbret’s own daughter, know that evidence exists to overthrow the so-called traditional legal system, if they can only get it into the right hands. The powerful lords will kill anyone who threatens their privileges.

To retrieve the proof, Alyssa must make a dangerous journey that will either change her life forever–or end it.

Lady Grace Wyatt is content as a wallflower, focusing on scientific pursuits rather than the complications of society matches. But when a handsome, celebrated naturalist returns from abroad, Grace wishes, for once, to be noticed. Her solution: to “build” the perfect man, who will court her publicly and help her catch his eye. Grace’s colleague, anthropologist Sebastian Holloway, is just the blank slate she requires.

In exchange for funding his passage on an expedition leaving London in a few months, Sebastian allows Grace to transform him from a bespectacled, bookish academic into a dashing—albeit fake—rake. Between secret lessons on how to be a rogue and exaggerated public flirtations, Grace’s feelings for Sebastian grow from friendship into undeniable, inconvenient, real attraction. If only she hadn’t hired him to help her marry someone else…

Sebastian is in love with brilliant, beautiful Grace, but their bargain is complete, and she desires another. Yet when he’s faced with losing her forever, Sebastian will do whatever it takes to tell her the truth, even if it means risking his own future—and his heart. 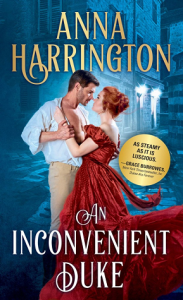 Marcus Braddock, Duke of Hampton and former general, is back from war and faced with mourning the death of his beloved sister, Elise. Marcus believes his sister’s death wasn’t an accident and he’s determined to learn the truth, starting with Danielle, the beautiful daughter of a baron and his sister’s best friend.

Danielle is keeping deadly secrets of her own. She has dedicated her life to a charity that helps abused women―the same charity Elise was working for the night she died. When Danielle’s work puts her life in danger, Marcus comes to her rescue. But Danielle may not need rescuing…

It was supposed to be simple.

Help Marshal Sebastian Hardin escort his prisoner one stop on the railway to Charter Oak.

But when that prisoner is a savant who talks to ghosts, even the simplest plans have a way of falling apart.

Sheriff’s Deputy Ruth Cortez always does the right thing. Lucky Boy is a company town, dependent on the rich and powerful Carnarvon family. Besides which, the charismatic Sebastian Hardin isn’t an easy man to say no to. When his transport derails in the middle of the prairie, Ruth begins a relentless manhunt that leads straight into the dark heart of the Carnarvon empire.

Lee Merriweather favors sharp suits and fast trains – especially when he’s stealing them. At the ripe old age of 18, he’s managed to become the most wanted criminal in three territories. Lee can’t resist playing cat and mouse with a small-town deputy, but what starts as a game becomes deadly serious.

Sebastian Hardin is the Carnarvons’ right hand, loyal to the death and willing to keep any secret to protect the family. They want Lee alive, but with the young savant’s disturbing abilities it won’t be an easy proposition. Whoever catches Lee gets the keys to the kingdom and the Carnarvons aren’t the only ones hunting him down. Sebastian has enough problems without falling for Deputy Cortez – but you can’t always choose who you love.

They terrorized the settlers until Calindra Carnarvon learned to speak their language. Her empire relies on controlling their telekinetic powers, but Lee Merriweather could destroy it all. And not even Lee suspects the shocking truth of the phantoms’ real nature.

The first series of original novels ever set in the world of Jim Henson’s The Dark Crystal.

Jim Henson’s The Dark Crystal: Shadows of the Dark Crystal is set years before the events of the classic film and follows the journey of a young Gelfling woman who leaves her secluded home to uncover the truth surrounding the disappearance of her brother who has been accused of treason by the sinister Skeksis Lords. 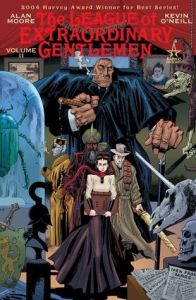 It’s one month after the events in League of Extraordinary Gentlemen Vol. 1, and the skies over England are filled with flaming rockets as Mars launches the first salvo of an invasion. Only our stalwart adventurers Allan Quatermain, Mina Harker, Captain Nemo, Hawley Griffin, and Mr. Edward Hyde can save mother England and the very Earth itself. But there are many startling revelations along the way, including the blossoming of love and the uncovering of a traitor in their midst!

Before they became legendary writers, Charlotte Brontë, Emily Brontë, and Anne Brontë were detectors in this charming historical mystery…

Yorkshire, 1845. A young wife and mother has gone missing from her home, leaving behind two small children and a large pool of blood. Just a few miles away, a humble parson’s daughters–the Brontë sisters–learn of the crime. Charlotte, Emily, and Anne Brontë are horrified and intrigued by the mysterious disappearance.

These three creative, energetic, and resourceful women quickly realize that they have all the skills required to make for excellent “lady detectors.” Not yet published novelists, they have well-honed imaginations and are expert readers. And, as Charlotte remarks, “detecting is reading between the lines–it’s seeing what is not there.”

As they investigate, Charlotte, Emily, and Anne are confronted with a society that believes a woman’s place is in the home, not scouring the countryside looking for clues. But nothing will stop the sisters from discovering what happened to the vanished bride, even as they find their own lives are in great peril…

Four destinies collide in a unique fantasy world of war and wonders, where empire is won with enchanted steel and magical animal companions fight alongside their masters in battle.

A soldier with a curse
Tala lost her family to the empress’s army and has spent her life avenging them in battle. But the empress’s crimes don’t haunt her half as much as the crimes Tala has committed against the laws of magic… and her own flesh and blood.

A prince with a debt
Jimuro has inherited the ashes of an empire. Now that the revolution has brought down his kingdom, he must depend on Tala to bring him home safe. But it was his army who murdered her family. Now Tala will be his redemption—or his downfall.

A detective with a grudge
Xiulan is an eccentric, pipe-smoking detective who can solve any mystery—but the biggest mystery of all is her true identity. She’s a princess in disguise, and she plans to secure her throne by presenting her father with the ultimate prize: the world’s most wanted prince.

A thief with a broken heart
Lee is a small-time criminal who lives by only one law: Leave them before they leave you. But when Princess Xiulan asks her to be her partner in crime—and offers her a magical animal companion as a reward—she can’t say no, and soon finds she doesn’t want to leave the princess behind.

This band of rogues and royals should all be enemies, but they unite for a common purpose: to defeat an unstoppable killer who defies the laws of magic. In this battle, they will forge unexpected bonds of friendship and love that will change their lives—and begin to change the world.