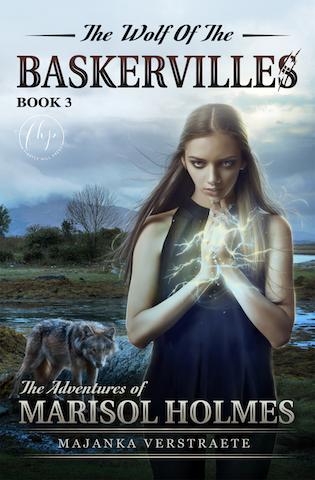 Who is Marisol Holmes?

And don’t forget, she’s also the descendant of the great Sherlock Holmes.

Our heroine had been in some pretty tight spots before, but now? She’s about to face her biggest challenge yet: a powerful shifter with a taste for blood. No one has faced down the deadly wolf of the Baskervilles and lived to tell the tale.

Even so, Marisol Holmes plans to do just that.

The next frame showed Roan. He too looked like he hadn’t slept in days, but to me, he was still… Handsome. Amazing. Strong. Everything I’d ever dreamt of. Roan, my Roan.

A hand that wasn’t mine but looked like mine, complete with Serpent Sigil and all, lifted and caressed Roan’s face. The pain that rocketed through me was horrible, sharp like a knife.

“Stop it,” I said to Melinda, even though I knew she wouldn’t end the torment. “I don’t want to see this.”

“For a moment there, I thought I’d lost you,” Roan said to my impostor. “I thought that…” He stopped mid-sentence, his eyes glazing over. “You shouldn’t have gone in there alone. It was too risky.” He grabbed Indra’s hand. “Promise me you won’t do it again. That from now on, we’re in this together.”

“Together,” Indra said in a voice eerily similar to mine. “Always.”

Author Majanka Verstraete has written more than twenty unique works of fiction. A native of Belgium, Majanka’s novels explore the true nature of monsters: the good, the bad, and just about every species in between. Her young adult books include the acclaimed Mirrorland (YA Dark Fantasy) and Angel of Death (YA Paranormal) series of novels. At MHB, Majanka is currently developing a new YA shifter series with a fresh take on fierce female detectives called THE ADVENTURES OF MARISOL HOLMES.

When she’s not writing, Majanka is probably playing World of Warcraft or catching up with the dozens of TV series she’s addicted to.

Want the latest news about Majanka Verstraete? Sign up for our newsletter!

PLAYING WITH FIRE BOXSET HAS GONE THROUGH THE EXTREME OF REBRANDING THEIR COVER. All 12 USA and international bestselling authors are proud to introduce to you our NEW Playing with Fire Boxset.

It doesn’t matter who you think you are…falling in love with the wrong person can have dire consequences.

They say love conquers all, but in the paranormal worlds of these twelve USA Today and international bestselling authors, falling in love means playing with fire…

Someone’s about to get burned.

Dig into hours of forbidden love, lust, and heat as these heroes and heroines long for their beloveds, break taboos, and fight for the ones they never should have chosen—but could never resist. This boxed set is bursting at the seams with romance grounded in all things magical—from dragons and sexy shapeshifters, to angels, warlocks, and uninhibited masters. We have something to strike everyone’s fancy. There are 1000s of sizzling pages full of forbidden love and the trials these gorgeous paramours face to fulfill their deepest desires.

Authors in the Playing with Fire set include: